Browse all articles for: Roofing

Understanding the Cost of a Roof Chimney Cap

##Summary: Chimney Cap Installation Pricing
Expect to pay between $150 and $300 on average to have a chimney cap installed. Prices will vary depending on the type of chimney cap you purchase as well as the accessibility of your chimney. 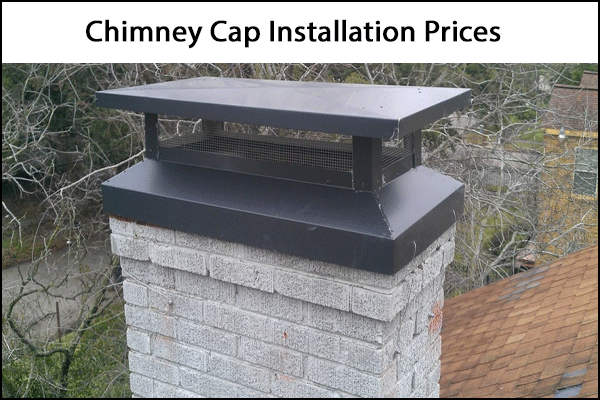 The purpose of a chimney is to let smoke and harmful gases such as carbon monoxide out, thereby keeping your family safe. But, problems can also arise if things are allowed to come into your chimney.

Chimney caps are designed to prevent animals, debris, and water from entering the chimney and wreaking havoc. They also help prevent roof fires and downdrafts. If your chimney doesn't have a cap, or the existing one is in disrepair, then it is paramount that you have a new one installed right away to avoid costly repairs down the road. Continue reading to learn more about chimney caps and chimney cap installation costs.

An Overview of Chimney Caps #

Within the chimney itself, is a chamber known as a flue which acts as a ventilation shaft for smoke, gases, and combustible byproducts. If you climbed onto your roof and looked at the chimney, you would see an open hole, the flue, at the top. It is over the flue, or flues, if your chimney has more than one, that the chimney cap is placed.

A chimney cap is a great choice for a variety of reasons, but you still need to make sure you have the right cap for your chimney. Different caps offer their own strengths and weaknesses depending on your particular setup, so it is important that you research your options thoroughly. There are different materials available, the most common of which are copper and stainless steel, because of their durability.

There are also larger caps for multi-flue chimneys, so you don't have to get multiple caps for each individual one. Basic caps are fairly cheap, with specially designed options (such as draft-enhancing models) increasing price. Regardless of the type of chimney cap you choose, the cost is always less than that of the repairs you may require without one.

Chimney caps allow smoke and gases to escape your fireplace while ensuring that no unwanted materials or pests get in. The type of cap you need depends on your aesthetic preferences, the functions you need it to perform, and the configuration of your chimney.

The first step in choosing a chimney cap is determining whether you have a prefabricated chimney or a masonry chimney.

Once you've determined what type of chimney you have, it's time to consider the different materials used to make chimney caps.

How Much Does a Chimney Cap Cost? #

Costs vary according to the size and type of cap as well as the material. An additional cost is installation, which varies according to average labor rates in your area.

Why Do I Need a Chimney Cap? #

Homeowners often question whether a chimney cap is something they really need. The truth is, this minor and relatively inexpensive installation provides significant protection against several things that may cost you thousands in damage and repair expenses. A chimney cap isn't necessary for functional purposes, but it is a great way to protect your home from embers, moisture, and small animals.

When animals block that space, it prevents the smoke and gases produced by the fire from exiting the home. With nowhere to go, these gases move back into your home, causing smoke and soot damage and possibly carbon monoxide poisoning to the people inside.

One of the reasons some owners choose not to install a chimney cap is the worry that it impedes chimney draft. While this is sometimes true if the cap is installed incorrectly, a professional installer makes sure that it is done right. In fact, a properly installed cap has the ability to fix draft problems. There are even specially designed chimney caps developed to correct or reduce common draft issues. However, it is important that you contact a professional to do the installation, as even specially designed caps have the ability to cause problems if improperly installed.

Debris entering your home via the chimney is more than just a nuisance; it can quickly become a hazard. Twigs and leaves fit easily into your chimney on a windy day, as do trash and other debris. While it is unlikely that your fireplace will quickly become nature's and the neighborhood's trash can, it is possible and may lead to a variety of issues.

Debris causes draft issues, keeping smoke from properly exiting the chimney into the outside air. It also doesn't take much to start a chimney fire, and a buildup of debris throughout the chimney is dangerous. But a chimney cap prevents these issues and leaves your chimney safe and free of debris. You should still clear any leaves or other detritus it catches, but that's a small price to pay for safety.

There is no such thing as a fire without sparks. Each and every time you use your fireplace, there are sparks, most of which stay within the fire chamber or at least the chimney's base. However, some of them are able to (and often do) reach the top of your chimney. Installing a cap ensures that you are able to light that cozy fire, without sparks flying out the top of your chimney to possibly cause a fire. This may seem like a reach, but the sparks from your fire are more than enough to cause brush, grass, or leaves to catch on fire themselves.

Beyond preventing you from lighting a fire, moisture damages to your chimney. Ice, rain, and snow all cause deterioration and other structural problems in a chimney, especially when that moisture mixes with soot. Even on their own ice and snow cause plenty of damage, as the process of freezing and melting is incredibly hard on the crown, liner, and walls of a chimney's masonry. This eventually leads to chips, cracks, and expensive repairs. A properly fitted chimney cap prevents these issues and saves you the expense of repairing your chimney every season.

There are upsides and downsides to installing your chimney cap on your own. In the pros column sits the fact that cap installation is relatively simple. Often it is as easy as inserting the flue tabs into the chimney and tightening the screws on the outside of the cap base, though it should be noted it is not always quite so easy. It is also cheaper to do it yourself, as most professionals charge around $175 for the entire process. If you do it yourself, you spend around $75 for the chimney cap and that's that.

In the cons column, there are a few more points. For one, if you do not have any experience with chimney caps, you may purchase the wrong type of cap or install it incorrectly. There is also no guarantee that you have the proper tools or know the safest way to put the cap on. A professional has all of the right tools and knows the safest way to go about the procedure. There is also a chance that DIY installation will void the warranty of the cap. Voiding the warranty means that the manufacturer will not replace the cap if something goes wrong later.

The most common type of chimney cap is a standard design to keep pests and the elements from entering. However, there are other types of chimney caps developed for specific purposes. These special caps include:

Watch the video below to learn about why a chimney cap is important:

Things to Avoid When Installing a Chimney Cap #

The whole point of a chimney cap is to keep debris, moisture, and pests from entering your chimney or home. If you do decide to install the cap yourself, there are some common issues you should be aware of to help you avoid them.

A mistake that many homeowners make is choosing a cap made of the wrong material. An incorrect chimney cap leads to safety issues, possibly causing chimney fires, enhanced draft, and letting in the elements. Gas log fireplaces should not be combined with galvanized chimney caps, as putting the two together causes corrosive exhaust and rust damage. Copper and stainless steel caps are more expensive, but come with fewer issues than galvanized ones. They also require less maintenance.

The wrong chimney cap can also make drafts worse. Although some caps have mechanisms designed to prevent or reduce drafts, others contribute to the problem. Evaluate the drafting in your home before deciding on the type of cap you install. In addition, you need to check whether your chimney has a damper mechanism. If not, purchase a cap that includes an integrated damper mechanism.

Another common mistake people make when putting on a chimney cap is buying one that does not fit. Choosing a cap that fits your flue exactly may be the most important factor. Buying the wrong sized cap not only adds time to the whole process, since you have to return and replace, but it may actually damage your chimney if you try to install it before realizing it's the wrong size.

If you did get the size right on the first try, make sure that the chimney cap is fully secured once installed. An unsecured cap can let in everything you're trying to keep out or fly off during a storm, possibly damaging your or a neighbor's property.

Use Our Free Service and Find Chimney Cap Companies Near You #

Access Control Gate Prices: How to Save on Installation and Maintenance

Looking for the best prices on access control gates? Our comprehensive guide breaks down the costs and options for your business.