Browse all articles for: Security

How Much Does a Fire Sprinkler System Cost?

If you own a business, it’s quite likely that your building will need to be equipped with a fire sprinkler system. Yet, choosing one that meets legal requirements and fits your budget can be quite the task. Below, we’ve detailed everything you need to know about selecting fire sprinkler systems and their typical costs. 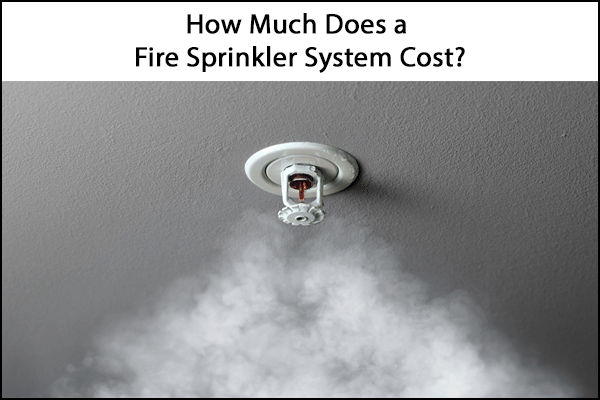 The cost of your fire sprinkler system will depend on the amount of coverage you need, the type of sprinklers you choose, and the type of building you own.

New construcition is usually the cheapest to outfit, since installation can be done in tandem with the building work. On average, it costs $1 to $2 per square foot for newly-built facilities.

Because historic buildings may require some difficult workarounds during the installation process, it can cost around $10 per square foot for fire sprinklers.

If your fire sprinkler system can’t be hooked up to municipal water lines, you may need to purchase a water storage tank and booster pump. This can increase your system costs by 22%.

A backflow preventer may need to be installed if your sprinkler system uses antifreeze. The purpose is to prevent the contaminated water from running back into the water supply. You’ll need to check with your city’s building codes if it is required in any other circumstances. Installation can cost $1000-$10,000 for a modest commercial building. Vast facilities can cost far more. 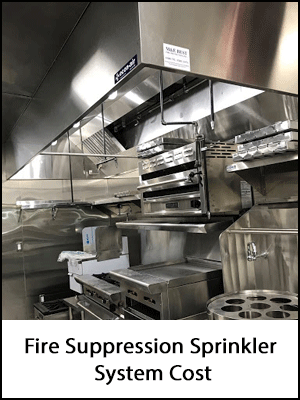 Separate fire detection systems that can be connected to your sprinkler system vary widely in price: from $700-$2300. These may be necessary for systems that will require advance warning of a fire breaking out, rather than counting on only the heat-proximity detection of individual sprinkler heads.

If you run a commercial kitchen, you may need to install fire supression systems that are essentially small sprinkler systems set directly within the hoods of your cooking ranges. These are designed to quickly and effectively put out cooking fires. The typical cost for suppression systems made to accomodate multiple cooking stations is $2200-$4000+. Individual stations can be outfitted for $365-$435.

Once your fire sprinklers are installed, they will need regular maintenance in order to ensure that they remain functional and effective.

Small commercial spaces can count on maintenance costs around $250-$1000 per year.

Why Does Your Business Need a Fire Sprinkler System? #

There are a multitude of reasons why having a fire sprinkler isn’t just a good precaution, but also a necessity when it comes to saving money, staying legal, and preventing catastrophic loss.

Business Fires are a Real Risk with Heavy Consequences

Fires in the workplace aren’t as rare as we’d like to think. And when they do occur, they can inflict serious costs. The breakout of a fire can be so damaging that it even leads to a business shutting its doors.

Time and time again, fire sprinklers have been proven to significantly mitigate the material and human losses that result from workplace fires. In fact, it’s usually the businesses without sprinklers installed that suffer the most damaging commercial fires.

When is a Fire Sprinkler System Required? Building Code Compliance #

The enhanced safety provided by fire sprinkler systems has made them a code requirement for many areas and facility types. These stipulations are usually based on average occupancy numbers and the nature of the facility’s operations. Most new construction is required to have fire sprinklers installed. 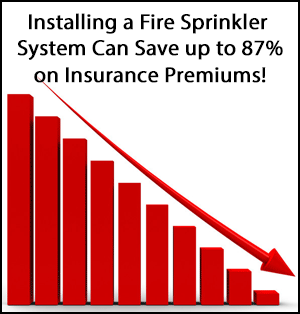 Businesses that install fire sprinklers can usually look forward to a reduction in their insurance premiums. This decrease can sometimes be as much as 57%-87%. A 20,000 square foot warehouse could save as much as $16,000 per year on insurance.

Properties that take extensive measures to prevent and control possible fires can qualify as “Highly Protected Risks” (HPRs), which would make them eligible for even greater insurance discounts. Having a thorough sprinkler system is a key part of meeting the requirements for an HPR designation.

Keep in mind that in order to maintain this insurance discount, you will need to annually provide your insurer with proof that your sprinkler system has been inspected and maintained. Overdue inspections can result in incremental decreases of the deduction.

You may be able claim multiple tax deductions if you equip your building with fire sprinklers:

If a fire breaks out in your unsprinklered facility and someone on the premises is harmed, you could be forced to pay restitution fees for preventable deaths and injuries. Courts have enforced payouts of more than $1 million per life in cases where someone died in a facility where sprinklers weren’t installed.

This even goes for businesses in locales where building codes did not specifically require fire sprinklers. Such rulings are based on the public expectation of fire sprinklers being present, given their widespread use.

In the event that a fire would break out in your facility, lacking a fire sprinkler system could lead to a long period of non-operation for your business. Fire damage can take several months to repair. If your building has to shut down to accommodate repairs, you could not only lose income during that period, but also lose customers in the long-term as they turn to competitors in your absence.

Fires that are not controlled by sprinklers can incinerate everything within a facility. From important documents to operation-critical equipment, there are many items that can potentially be lost. Even if some property was insured, it can still take time and extra expense to replace.

When your business is protected by fire sprinklers, your property is more likely to survive a fire. Most of the resulting damage would be due to water soaking. In some cases, all that it takes to restore the objects is to carefully dry it with the help of a remediation service.

What to Keep in Mind When Selecting a Fire Sprinkler System #

In order to choose a fire sprinkler system that’s the best fit for your building and your budget, you’ll need to give some thought to a few key factors.

It doesn’t matter if you’ve bought the most cutting edge system on the market: if your fire sprinkler setup doesn’t meet all of the code requirements applicable for your building type and area, then your investment has been wasted.

Not only will a code-violating system present serious safety risks, it can also open you up to fines and more installation expenses down the road when you’ll be inevitably required by authorities to update it. Investigate which codes you’ll need to abide by in order to ensure that the system you install is fully compliant.

Watch this video to help you understand exactly how a sprinkler system work.

Some business owners are hesitant to install fire sprinklers because they are afraid of the water damage that would result from the sprinklers accidentally being triggered. The good news is, this concern is mostly unfounded.

Fire sprinklers very rarely trigger by accident, and they don’t trigger over minute stimuli such as a burning cigarette or a lighter held within range. And instead of the whole sprinkler system being activated, each sprinkler turns on individually - only when it detects enough heat in its vicinity. Thus, the Hollywood image of an office being flooded over a whiff of smoke is simply fiction.

Even without concern over accidental activation, some business owners are still wary because they don’t want to pay for water damage created by sprinklers. However, it’s important to know that the resulting water damage would be far less expensive (and dangerous) than the cost of a fire without sprinkler control.

Total water damage cleanup and repair costs an average of $12-$25 per square foot, while fire damage incurrs costs of $14-$47 per square foot. This means that foregoing sprinklers can potentially cost as much as 88% more.

There are a variety of different sprinkler systems available, each with their own pros and cons, as well as cost levels.

Water is kept sitting within the pipes of these systems in order to provide immediate dispersal. These typically have lower maintenance needs than other types of sprinklers, making them an ideal candidate for very large buildings and high-rises. The fact that they retain water makes them prone to bursting in freezing temperatures, so they aren’t suitable for buildings without heat in cold climates. Wet pipe sprinklers have the lowest installation and maintenance costs. 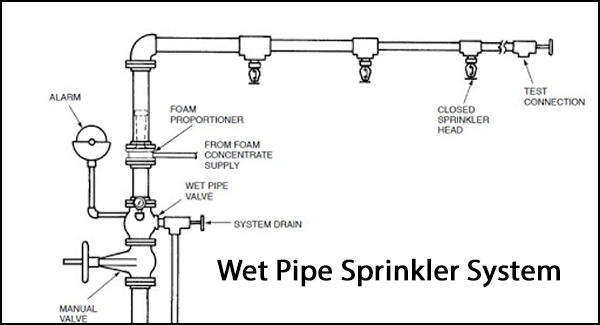 Water is kept out of the pipes until the fire sprinkler is activated. This makes dry pipe the standard choice for warehouses and other facilities where there is a risk of freezing. However, they do require more routine maintenance, and require a more complex installation process. Dry pipe sprinklers have higher installation and maintenance costs than wet pipe sprinklers. 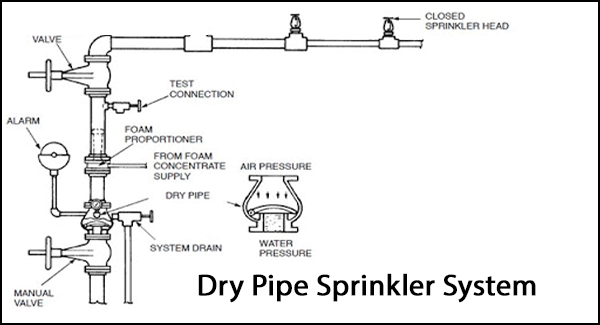 These are a type of dry pipe sprinkler. A large amount of water is released to flood fires that have a high risk of spreading or contacting combustible materials. This makes them the common choice for industrial facilities, and buildings that store especially flammable substances. Because of the need for greater volumes of water and often a more sophisticated fire detection system, deluge sprinklers have even higher installation and maintenance costs than standard dry pipe sprinklers.

Innovation is leading to the creation of more advanced sprinkler systems that extinguish fires more effectively, use less water, and are even integrated with IoT facility management programs. Foam, mist, smart sprinklers, etc. - you can expect these upgraded sprinkler designs to cost a premium.

How Much Does a Gate Access Control System Cost?